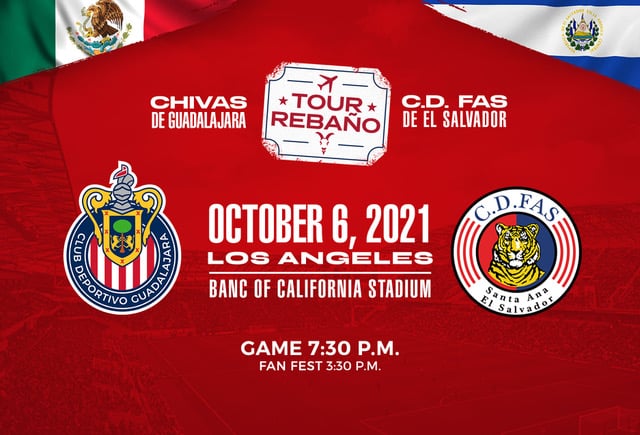 PRIMETIME Sports has confirmed that the international friendly match between Club Deportivo Guadalajara and C.D. FAS will take place on Wednesday, October 6 at Banc of California Stadium.

Chivas de Guadalajara is the only Liga MX club that plays exclusively with Mexican players and it’s one of the most popular and winning clubs in Liga MX, with 12 league titles, four Cup titles and a CONCACAF Championship.

FAS, with 18 championship titles to its name, is El Salvador’s current champion and leads the league’s current standings. The Club will visit its large fanbase in Los Angeles to compete against one of Mexico’s most legendary clubs and will look to elevate its name as well as that of El Salvador’s most popular sport.

The game is scheduled for Wednesday, October 6 at 7:30 p.m. PST at Banc of California Stadium, home of Major League Soccer’s LAFC. A Fan Fest will take place starting at 2:30 p.m. PST consisting of live music, food, and an autograph session from a Chivas legend. The game will be broadcast live on TUDN in the United States and in Mexico.

Tickets go on sale September 14th at 10:00am PT and are available at the stadium box office, ticketing outlets, ticketmaster.com, and ticketon.com.