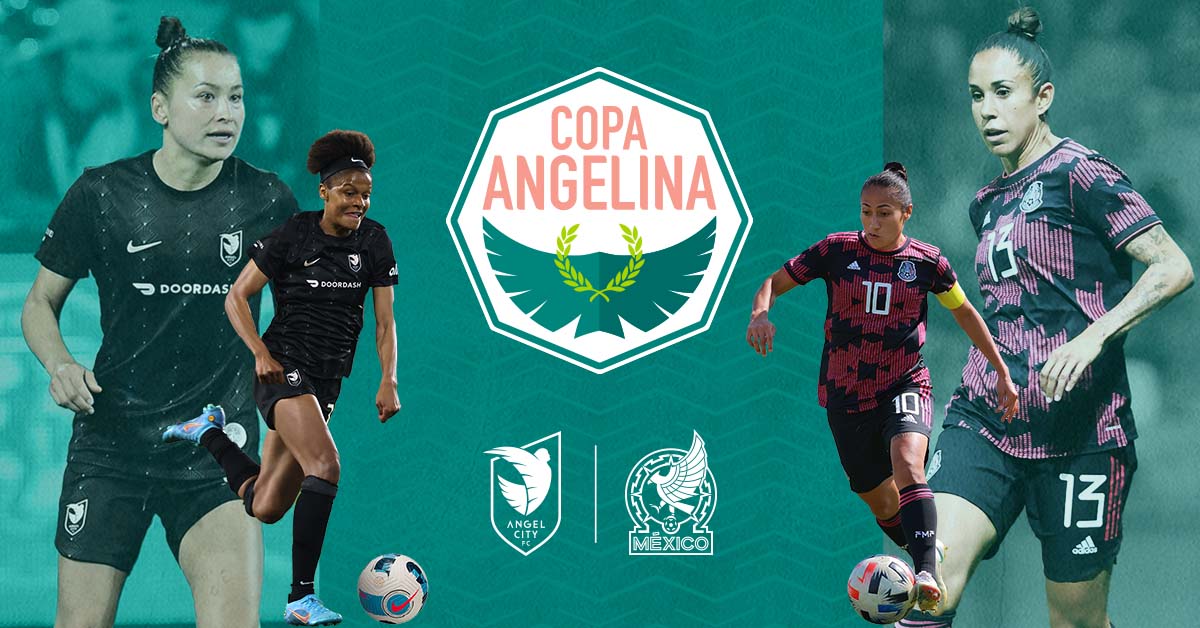 Copa Angelina celebrates a mutual love of soccer, bringing together the storied history of the FMF and the path ACFC is forging for women in sports. The event will highlight the rich Mexican culture in Los Angeles through entertainment, community outreach, and an annual competition on the pitch.

Current ACFC Season Ticket Holders will receive tickets for their regular season location unless they opt out of the match.Tickets will be available to the general public at www.AngelCity.com and on Ticketmaster on Tuesday, July 12.

The organizations also announced today that fans will have access to a pre-game Fan Fest adjacent to the Banc of California Stadium and that a musical artist will perform at the game.The musical act and details of the festivities will be shared soon.

Copa Angelina will be broadcast on the Televisa Univision family of networks in the UnitedStates and Mexico.

“We are excited to partner with the FMF and SUM to host this first-of-its-kind annual event featuring a national team and a professional team and bringing together our communities, cultures, cities, and countries,” said ACFC President Julie Uhrman. “We look forward to growing Copa Angelina year after year. We hope to set an example of what is possible when two organizations come together, celebrating our commonalities and differences, as we gather our communities to enjoy the beautiful game.”

“At FMF we are working on a solid growth strategy for women’s football based on three main pillars: talent acquisition, training and development, and competition and spectacle,” said Yonde Luisa, president of the Mexican Football Federation. “Not only because we are confident in and proud of the potential of our players, but because we are committed to capitalizing on the universal language of football as a vehicle for female empowerment. We hope to bring this unforgettable experience of our women’s national team to our fans this fall in LosAngeles for Copa Angelina.”

“We look forward to bringing together Angel City, one of the country’s newest professional women’s soccer clubs, and the Mexican Women’s National Team, an established brand with a tremendous future ahead,” said Adrienne Barber, SUM vice president of properties. “Copa Angelina will positively impact the Los Angeles community by celebrating the culture and shared purpose between both teams that will continue to pave the path for the growth of our sport in North America.”

The group also unveiled today a bespoke Copa Angelina logo. It represents the two cities and cultures coming together to uplift women’s soccer globally, while honoring the deep-rooted Mexican heritage of Los Angeles. The crown of laurels—a symbol of victory—comes from the Angel of Independence Monument in Mexico City, while the octagon shape is inspired by the gazebos in the famed Mariachi Plaza in LA and Plaza Garibaldi in Mexico City. The symbolism steeped in this brand, coupled with the creation of a completely new international competition, makes Copa Angelina a one-of-a-kind endeavor.

ACFC debuted in the National Women’s Soccer League in April 2022 to a sold-out crowd of 22,000 at Banc of California Stadium, their home pitch. The club is led by Head Coach Freya Coombe and is composed of stars such as USWNT forward Christen Press, ACFC team captain and New Zealand international Ali Riley, forward Simone Charley, midfielder Savannah McCaskill, Japanese international Jun Endo, and Canadian international Vanessa Gilles. The club is midway through its first season to much fanfare and support from fans locally, nationally, and around the globe.

The Mexican Women’s National Team is ranked 26th in the FIFA World Rankings, published on June 17, 2022. The team has been led since January 2021 by former Mexican international Mónica Vergara, who began working with the group during the pandemic. Under Vergara, the team has held eight training camps and scouted 55 players from LIGA MX Femenil and the leagues of Spain, the Netherlands, Portugal, France, and the United States. Standouts on the roster include Tigres forward Stephany Mayor, Club America forward Katty Martínez, and LIGA MX scoring champion Alicia Cervantes, in addition to Mexican-Americans María Sánchez and Diana Ordóñez of the Houston Dash and North Carolina Courage, respectively. The team is captained by Real Madrid defender Kenti Robles, who is the longest-serving player on the team.

More information on the September 5 game will be announced at a later date, including broadcast details and media accreditation. Cedars-Sinai, the Official Health Partner of Angel City, will support Copa Angelina starting this year as an avenue to strengthen the health of the Los Angeles Community and beyond. Additional commercial partner announcements to follow.