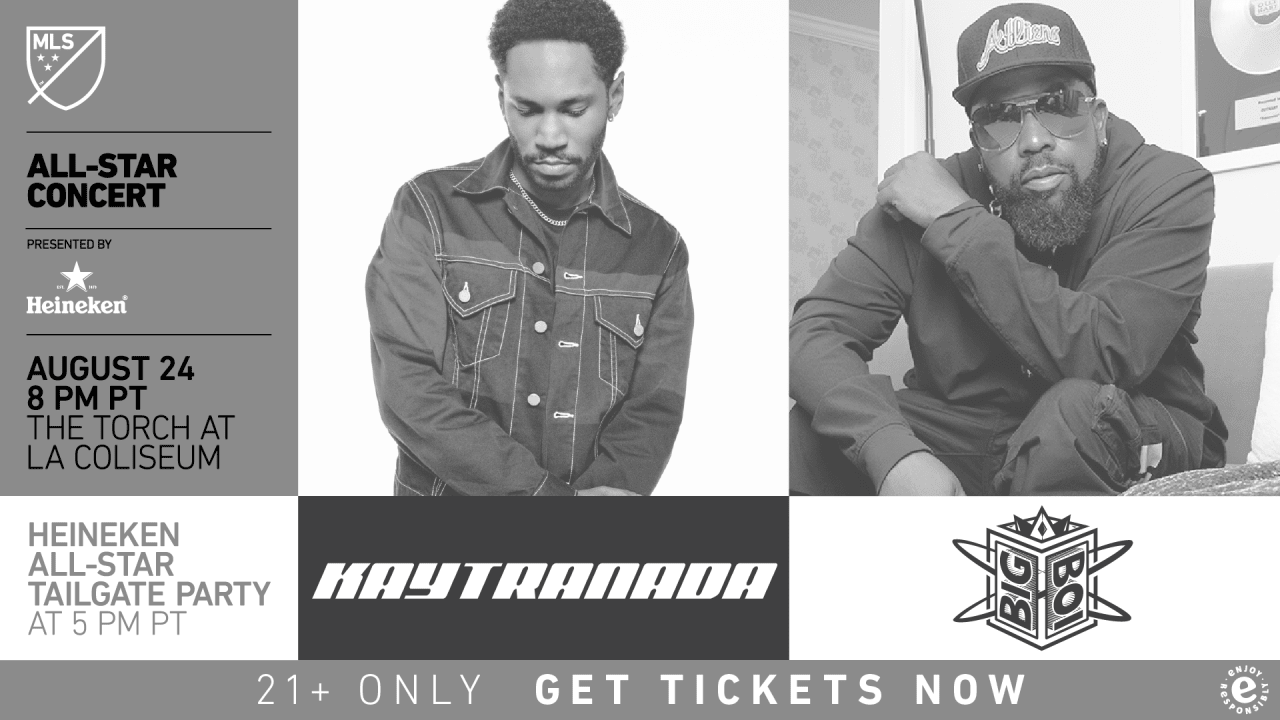 Grammy-winning Haitian-Canadian producer DJ Kaytranada, and Grammy-winning rapper, producer and songwriter Big Boi, will co-headline the MLS All-Star Concert presented by Heineken® on Tuesday, August 24 in Los Angeles at The Torch, located at the Los Angeles Memorial Coliseum. Tickets are on sale now at Ticketmaster and TheTorch.LA. The musical performance is part of a week of fan experiences before the 2021 MLS All-Star Game presented by Target on Wednesday, August 25.

Beginning in 2010, Kaytranada rose to prominence after releasing a series of mixtapes, remixes, and original music projects. After signing a deal with XL Recordings in 2014, Kaytranada debuted his studio album 99.9% in 2016, earning him Artist of the Year for the Canadian Independent Music Awards and Electronic Album of the Year at the Juno Awards. In 2019, Kaytranada released BUBBA, for which he won two Grammy Awards in 2021 (Best Dance Recording for “10%” with Kali Uchis and Best Dance/Electronic Album) as well as a Juno Award.

Big Boi quickly reached superstardom in the early 1990s as half of the iconic duo OutKast. The legends sold 25 million albums and won seven GrammyAwards, becoming the first and only hip-hop artist in history to win the Grammy for “Album of the Year” upon release of the 2003 RIAA Diamond-certified Speakerboxxx/The Love Below.

“I am a big Atlanta United fan so I’m excited to be performing at the MLS All-Star Concert presented by Heineken® in Los Angeles in a few weeks,” said Big Boi. “It’s going to be a good time and I’m pumped to share some of my new music live with my fans.”

Big Boi made his formal debut as a solo artist in 2010 with Sir Lucious Left Foot: The Son of Chico Dusty, followed by Vicious Lies and Dangerous Rumors (2012), Big Grams (2015) and Boomiverse (2017). In July, the Atlanta native released the new song “‘lowercase (no cap)’” with Sleepy Brown featuring Killer Mike as part of an upcoming collaborative album The Big Sleepover.

The concert marks the culmination of exciting soccer celebrations for fans on Tuesday, Aug. 24. The Heineken® Tailgate, located at Christmas Tree Lane at Exposition Park, kicks off the evening festivities at 5 p.m. PT for those ages 21 and older and will feature live DJs – including Funk Freaks – a beer garden, and giveaways. Fans of all ages can attend The MLS All-Star Skills Challenge presented by AT&T 5G at 6 p.m. PT where MLS stars will battle the best of LIGA MX at LAFC’s Banc of California stadium.

Concert doors open at 8 p.m. PT for fans 21 and older. Concert tickets are $15 and will benefit World Central Kitchen, a non-profit organization that uses the power of food to nourish communities and strengthen economies in times of crisis and beyond. World Central Kitchen is a team of food first responders, mobilizing with the urgency of now to get meals to those who need them most.

The following day, Wednesday, Aug. 25, the 2021 MLS All-Star Game presented by Target will be broadcast in the U.S. on FS1 and Univision, in Canada on TSN and TVA Sports, and throughout Mexico and Latin America on ESPN at 9 p.m. ET / 6 p.m. PT. Tickets for the MLS All-Star Game are available at mlssoccer.com/all-star.