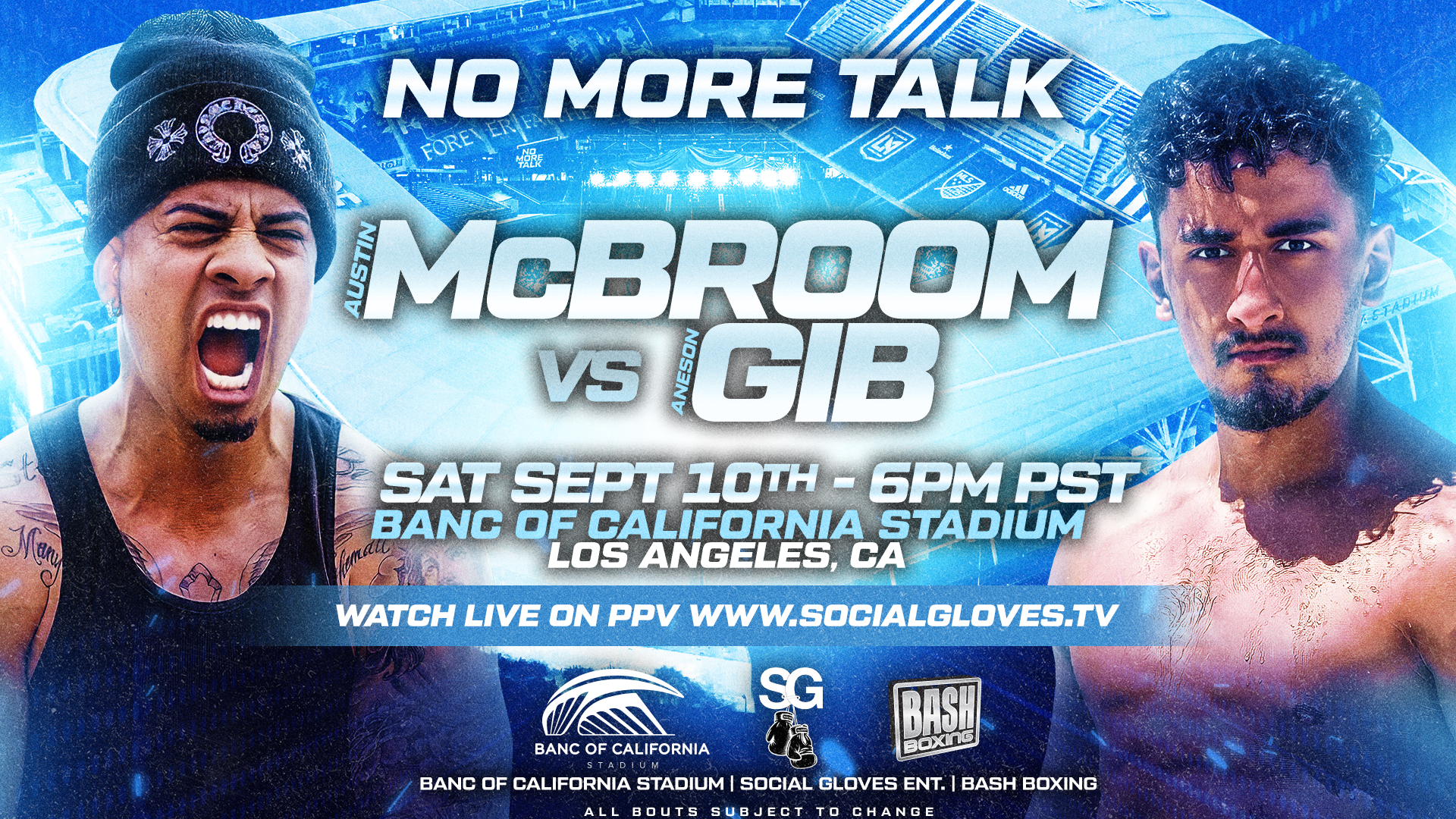 Presented by Bash Boxing in association with Simply Greatness Productions and NextGen Boxing, tickets for the Social Gloves: ‘No More Talk’ starting at $35 will go on-sale this Wednesday, August 24 at 10:00 a.m. PT and can be purchased online at www.BancOfCaliforniaStadium.com and www.Ticketmaster.com .  Banc of California Stadium is located in historic Exposition Park at 3939 S. Figueroa St., Los Angeles, CA 90037.

The extraordinary evening of entertainment will be broadcast internationally by Integrated Sports Media who will distribute the event across North America live on Pay Per View via DirecTV, iN Demand, DISH, Shaw PPV and SaskTel priced at $39.99. Additionally, it will be broadcast via PPV online at SocialGloves.TV, FITE (all FITE mobile, OTT Streaming and Smart TV apps) and PPV.com.

Two additional Youtube superstars lace up the 10oz. gloves and step into the pro ranks for the first time in a West Coast vs. East Coast Battle between Landon McBroom, brother of Austin, and Adam Saleh. The scheduled four-round battle will be contested at a weight limit of 165lbs.

An additional long-awaited exhibition clash on the Social Gloves: ‘No More Talk’ undercard includes the Battle of the Reality Stars, Corey Wharton vs. Chase DeMoor.

With an extraordinary and intense international build-up over the last twelve months, Austin McBroom and AnEson Gib have agreed to settle the animosity once and for all in Downtown Los Angeles in front of an expected massive crowd at Banc of California Stadium. McBroom made his boxing debut in an exhibition bout at the first Social Gloves event, knocking out Bryce Hall on June 12, 2021 at Hard Rock Stadium in Miami, FL. A native of Southern California, McBroom was a heralded three-sport varsity athlete in basketball, baseball and football at Campbell Hall High School in Studio City, CA, helping lead the Vikings to their 3rd State title in four years with backcourt mate and future NBA star Jrue Holiday. He then starred in the backcourt for the Division 1 Eastern Washington University Eagles before embarking on a successful career as a YouTube creator.

Gib holds a white-collar boxing record of 3-1 and is heading into the ring with McBroom following a dominant win over Tayler Holder. He made his professional boxing debut during Super Bowl weekend against Jake Paul on January 30, 2020 in Miami, FL. The six-round professional bout against McBroom will be contested at a weight limit of 180lbs.

Since retiring in 2018, Nick Young has used boxing training to stay in shape, having recently increased his training ahead of his debut. Young starred for the Los Angeles Lakers from 2013-2017. He was a first-round draft pick following three star-making seasons at the University of Southern California including two First-Team All-Pac-Ten listings. Born and raised in Los Angeles, Young attended Grover Cleveland High School in Reseda, CA. With the team finishing 25-4 in his senior year, Young was named to the Los Angeles Times All-City Team. Young currently competes in the BIG3 basketball league.

With two platinum and four gold certifications from RIAA (Recording Industry Association of America), BlueFace is one of the most successful hip-hop artists of the last five years. Also born and raised in Los Angeles, he was a star quarterback at Arleta High School in the San Fernando Valley leading the team to the East Valley League Championship in 2014. He made his victorious boxing debut in an amateur bout against Tiktoker Kane Trujillo on July 23, 2021 at BKFC-19 in Tampa, FL. Standing 6’4” tall, BlueFace will only give away three inches to Young in the ring. Their exhibition fight is scheduled for five rounds.

Le’Veon Bell starred for eight seasons with the Pittsburgh Steelers and was a two-time First Team All-Pro. He has also played for the New York Jets, Kansas City Chiefs, Baltimore Ravens and Tampa Bay Buccaneers. Just 30-years old, the former Michigan State Spartan has rushed for 6,554 yards in the NFL. He earned a Super Bowl ring with the Champion Kansas City Chiefs in 2020.

Adrian Peterson has played for fourteen years in the NFL and was the league’s most valuable player in 2012 in addition to being a four-time First Team All-Pro. A first round draft pick from Oklahoma, Peterson was the third fastest running back to compile 10,000 career yards in 2013. Known league-wide for the phenomenal shape he stays in year-round, Peterson played ten years with the Minnesota Vikings. In 2021, Peterson competed for the Tennessee Titans and Seattle Seahawks.

Additional undercard bouts for Social Gloves: ‘No More Talk’ will be announced shortly.